There is a growing trend in today’s job market to prioritise a broad, comprehensive education over a narrow specialization in one field. This has been reflected at the academic level, too: many students prefer the schools that give them self-fulfilment, freedom of choice, and a flexible timetable. These classical or liberal arts schools can end up shaping one’s future, claims Skirmantas Kriaučionis, Associate Professor at the University of Oxford (UK). In his own experience, graduating from such a school, Vytautas Magnus University (VMU) in Lithuania, was invaluable to his future success.

“While I was studying, I did not yet understand this fully and perhaps I was a bit indifferent to things that weren’t directly connected to natural sciences. However, once I graduated from VMU and started working, I realized how important a broad education is. I first noticed it when I traveled abroad and introduced Lithuania to others”, Kriaučionis remembers.

The biochemistry scientist has already gained prominence in his field after making a revolutionary discovery: he was the first one to identify a new type of epigenetic modification during postdoctoral studies at the Rockefeller University (New York, USA) laboratory of Nathaniel Heintz. This modification, 5-hydroxymethylcytosine (5hmC), became one of the most hotly debated topics in epigenetics. The reason for the uproar? Apparently, 5hmC has the potential to not only expand our understanding of the way our brain works but also aid in the treatment of cancer.

Today Skirmantas Kriaučionis oversees a lab at the Ludwig Institute’s branch established in the University of Oxford. Here, the research team is working at the forefront of science, focusing on the identification of molecular mechanisms in the genome function affected by DNA modifications. Kriaučionis says the entire staff is inquisitive and educated; unsurprisingly, then, he and his colleagues often touch upon a wide variety of subjects, including linguistics, history, economics, culture, and many others.

While actual scientific discoveries must not be underestimated, there’s more to a scientific career than just flasks, white coats, and research papers. Kriaučionis argues that you cannot get very far without the ability to present your work in a compelling way. This means that all the general skills you develop at the university, such as rhetoric, psychology, or creative writing, may become indispensable in your career.

Liberal arts universities provide the students with a broader perspective, which helps them to approach an issue from multiple angles, make informed decisions, and adapt to unforeseen circumstances. Universities such as VMU promote openness, tolerance, and dialogue, while nurturing a creative, liberal and democratic learning environment.

Kriaučionis has spent the last decade conducting DNA research in the United Kingdom. He is, however, also following the situation in the native Lithuania and, specifically, its recent trend of university mergers. As a result of one such merger, this year Vytautas Magnus University has been officially joined by the former Aleksandras Stulginskis University and the Lithuanian University of Educational Sciences, which became VMU Agriculture Academy and VMU Education Academy respectively. The expansion only reinforced VMU’s dedication to liberal arts principles and an education that nurtures critical thinking.

“When I was studying, the university had attracted the best professors from Lithuania and even from well-known foreign universities. It was not uncommon for a single academic course to be taught by several lecturers simultaneously. It was a great opportunity to talk to actual experts and widen my horizons. The freedom to choose the subjects and create my own study schedule also allowed me to deepen the knowledge in the fields that I simply found interesting. Sometimes it was even a challenge to register for the more popular courses; however, the overcrowded registration was worth it for the great lectures that followed”, Kriaučionis, alum of VMU Faculty of Natural Sciences, explains. Today his alma mater remains one of the leading Lithuanian universities in international relations. 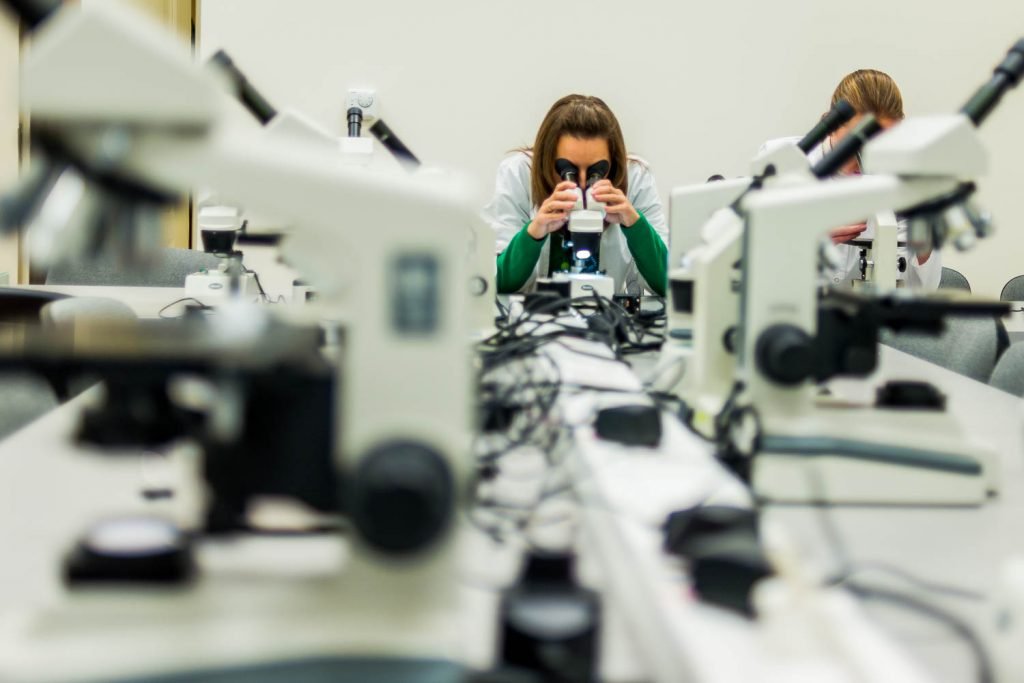 VMU Faculty of Natural Sciences conducts international research with involvement from both scientists and students: the latter join in from the second year onwards. The faculty’s infrastructure has been expanding a lot over the recent years, the numerous labs and research spaces paving the way for cutting-edge discoveries in various fields.

Unsurprisingly, recent national ratings have established VMU as one of the leading Lithuanian universities, particularly in the studies of biomedical fields such as environmental sciences, ecology, molecular biology and others. Internationally, QS World University Rankings have rated VMU among the top 3 percent universities of the world, with particular achievements recognized in the areas of academic reputation and numbers of international students.

VMU Faculty of Natural Sciences has also received praise from international experts hired by MOSTA, the Research and Higher Education Monitoring and Analysis Centre, who singled out the faculty’s biomedical research as the best in Lithuania, especially due to its efforts in researching the impact of electric fields on biological systems and their processes. The assessment was performed by international experts from prestigious higher education institutions in Oxford, Manchester, Berlin and other major cities.

Skirmantas Kriaučionis is Associate Professor at the University of Oxford, Associate Member of the Ludwig Institute for Cancer Research, Group Head / PI, Member of congregation and Supervisor. As principal investigator, he has been working on the epigenetic mechanisms in cancer and normal neuronal cells. Kriaučionis’ broad scientific interests include innovative ways to fund science to achieve the best impact and the quality and reproducibility of science. His current group at the Ludwig Institute is researching epigenetic DNA modifications’ impact on transcription, mutability of DNA and other questions.

Dr. Mathew Knowles, the Grammy Award-winning US music executive and mastermind behind the success of Destiny’s Child and his daughters Beyoncé and Solange, will...
Read more
Europe

“You are the energy of Polytechnic University”:...

A total of 24 students from Turkey who studied nuclear power plant design, operation, and engineering received their diplomas. They were enrolled in the...
Read more