At the Intersection of Biology, Chemistry, and IT: New participants of ITMO Fellowship & Professorship program discuss their research at university

How to make scientists, constantly cooped up in their laboratories, communicate more, and find new points of contact for joint work at the intersection of several fields of knowledge? This question is especially topical for those who work on fixed-term contracts or as part of an exchange and are thus especially intent on spending all their time on work. It is for supporting communication between different scientists coming to ITMO that the university’s Internationalization Department organizes meetups for participants of the ITMO Fellowship & Professorship program. ITMO.NEWS attended this year’s first gathering to find out more about the research pursued by the new members of the community. 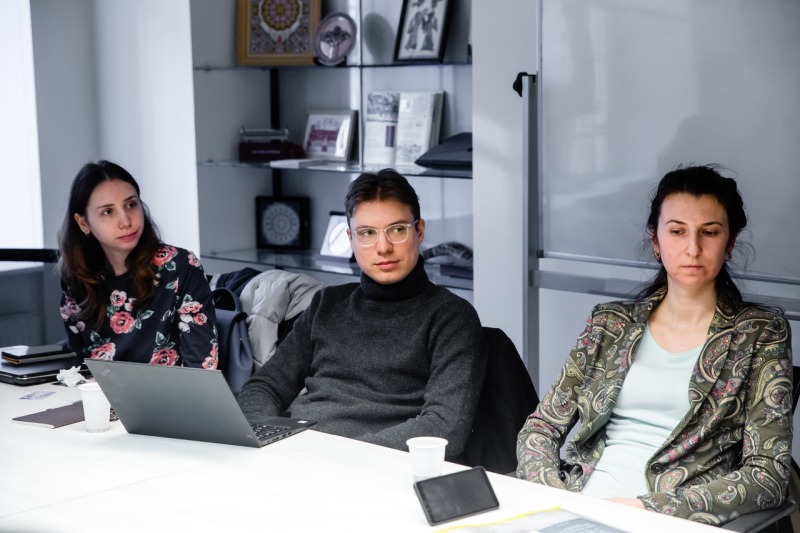 The meeting of the participants of the ITMO Fellowship & Professorship program

The Fireplace Hall of ITMO University’s campus on Lomonosova St. 9. The scientists – PhDs, postdocs, associate professors – are gathered around a large table. There is no agenda or minutes; instead, there is pizza and an opportunity for the attendees to discuss their research, students, and conferences in an informal setting. This is 2020’s first meeting of the participants of the ITMO Fellowship & Professorship program, aimed at attracting the best specialists to ITMO University.

“The goal of the ITMO Fellowship & Professorship program is to expand the university’s talent pool with the world’s best minds in different stages of their scientific career, from postdocs to professors,” says the program’s coordinator Daria Zhukova. “We recruit lecturers and researchers who can come to St. Petersburg for different periods of time: from two weeks to three years. They join the university’s scientific units, carry out research, and deliver lectures to students, pass on their international experience, share the research work and topical scientific trends that are maintained in their home universities.”

On average, such meetups take place once in two months – this is necessitated by the fact that every two months, ITMO welcomes a dozen new specialists, or fellows, as part of the program. The gatherings help the newcomers settle in, get to know each other, and understand what collaborations they can initiate at the university. Having come to work at different units and in different buildings, it is quite important that scientists could meet each other.

One of the first to take the floor was Diana Markozashvili. Until very recently, she has been working at Peter the Great St. Petersburg Polytechnic University, having obtained a PhD in Paris before that. As part of the ITMO Fellowship & Professorship program, the researcher joined ITMO’s SCAMT Laboratory, where she partakes in the creation of DNA nanorobots for the diagnostics and treatment of diseases.

“As of now, a part of the constructs have already been assembled, and we have demonstrated their efficiency in vitro,” shares Diana Markozashvili. “Our task for this year is to ensure their operational capacity in living cells. We use DNA molecules with catalytic properties. They bind a DNA or RNA molecule and then cut it, thus exterminating the affected cell. Right now we’re focused on oncology, but our nanorobots can potentially be used for treating a great number of diseases. If the system is proven to work on cell lines, we can then move on to test it on animals and in clinical trials in order to propel it to the level of pharma.”

But the researcher’s interests don’t just stop there: she also pursues the field of Art & Science. Diana’s record in this regard includes an exhibition in France, which was inspired by her scientific work.

“Because I’m interested in not only science but also art, it’s a huge pleasure for me to be able to combine these two fields,” shares the researcher. “For example, I held an exhibition in Paris that was dedicated to my thesis topic, epigenetics, which I tried to showcase using artistic methods. I made fluorescent installations on the topic of stability vs changeability. ITMO University’s Master’s program in Art & Science really sparked my interest, and I would like to collaborate on it.”

Also talking about her work was Anna Zhuk, who previously worked in the research group of Prof. Stephen J. O’Brien and has joined ITMO after him. Anna specializes in the study of yeast genomes, but will engage in research of other organisms, too.

“Yeast is a convenient and well-studied model object widely used in various research – from fundamental mechanisms of mutagenesis, aging, repair, replication, transcription, and translation to the modeling of human diseases,” says the scientist. “It was the first eukaryotic organism to have its genome sequenced. Many yeast strains have been sequenced recently, expanding the opportunities for the use of yeast both in research and practical applications in biotechnology. What is yeast good for? Its genome is, to some extent, similar to that of humans; of course, it’s not completely the same, but the fundamentals – such as replication, repair, transcription, that is, the underlying mechanisms – have a lot in common. The yeast genome can easily be subjected to transformations, and the yeast genes can be replaced with their human analogues, which is convenient if we want to study something in human cells. We can start with yeast in order to be able to formulate a hypothesis.”

Working as part of ITMO’s Computer Technologies research center, Anna Zhuk will also study the genomes of rare species; in particular, she will focus on the analysis of close branches of the Puma genus.

“Today, we have access to high-precision assemblies that contain sequences of entire chromosomes,” explains Anna. “This allows us to understand how species differ from each other, where genomic rearrangements took place, as well as to clarify the location of genomic elements and improve gene annotation. All this is important for understanding the processes of adaptation and speciation.”

Conferences and the search for talents

Apart from getting to know each other and considering opportunities for future collaborations, the scientists also discussed international conferences and how they themselves can help in the search for new participants of the ITMO Fellowship & Professorship program.

“We are starting a large-scale promotion campaign for the program and as part of this initiative, actively urge heads of research units to send us information on the positions their units need reinforcements in, so that we could promote these openings on job sites,” explains Daria Zhukova. “Of course, attracting new specialists also depends on the personal contacts of ITMO’s staff, as well as the conferences they attend, where they meet their international colleagues and tell them about our program.”

An analysis of baby names published in municipality newsletters between 1979 and 2018 by Assistant Professor Yuji Ogihara of Tokyo University of Science and...
Read more
Asia & Oceania

The Internationalization Program is one of the flagship programs of the International Relations Study Program (HI) of Universitas Muhammadiyah Yogyakarta (UMY). To facilitate this,...
Read more
Asia & Oceania